I’ve had my eye on Toronto-based Panoply Classical Collective since its inception. Led by “Core Four” Artistic Directors, Olivia Tharme, Paige Madsen, Alyssa Pothier, and Sienna Singh, this troupe of young conservatoire graduates is quickly making a name for itself in the larger Toronto theatre and performance scene.

I reached out to the collective following their successful adaptation of Shakespeare’s Romeo and Juliet with some questions about contemporizing the classical canon, dynamic theatre making, feminism, making space as “emerging” creator-performers, and more. Here’s what they had to say.

THE CAMILIAD: First and foremost, I want to thank you all so much for participating in this Artist Roundtable Series. I’ve been trying to engage with a diverse range of local artists and groups undertaking provocative work — and reaching out to you all was one of my first impulses.

I’ll start with a basic introductory question: Panoply defines itself as an “actor’s initiative”, dedicated to challenging audience’s preconceptions of classical theatre by using “modern sensibilities” to bring new life to plays from the classical canon. You’re also known for sourcing site-specific spaces for your productions that, to quote your mandate, “reflect and compliment the unique worlds of each play.” How exactly, did this mandate — and your collective — come into being?

PANOPLY CLASSICAL COLLECTIVE: Our collective was born out of a desire to create and play. Initially, and because we were all in different years of the same training, we were looking to collaborate with our friends and apply some of the actor training we’d garnered at Ryerson. We wanted to find out what we could create on our own!

Our mandate, and the name Panoply Classical Collective, came later that year during our production of Macbeth: More Than Man. We all gravitated toward classical theatre. This led us to big questions like: What Defines Classical Theatre? and Is Classical Theatre Still Relevant Today? Classical theatre is everywhere. We all grew up sitting in the school-trip-rows of the mezzanine at Stratford and then watching 10 Things I Hate About You in high school English class. We wanted to bridge the gap between taut classical performance and modernized adaptations.

We believe there’s a difference between modernizing and contemporizing. You don’t need to take classical texts out of their context to make them relevant. You need to bring life into their original contexts. Each play exists in its own unique world. The excitement lies in developing these worlds; using movement, design, and style to create something “other”. Something unique.

I’m interested, specifically, in the shows you chose and why. Your company is comprised of young adult actors. Romeo and Juliet seems like an obvious choice — the most obvious of the three — but why Macbeth? Why Much Ado? What does breathing new (kinetic) life into these productions, in the year 2019, do?

As a young actor, Shakespeare can seem so mammoth and intangible. It doesn’t have to be. It’s important to us that the young actors in our collective are given the opportunity to dive into luscious work like this. When we began working on Macbeth, our ensemble had many discussions about the content. How can a group of twenty-something actors in 2019 relate to an Elizabethan drama about a tyrannous king?

In a Macbeth rehearsal chat, Isabelle Ellis, one of our collective members, said it best: “I’m not a mother and may not be a mother for a long time, but I know how to comfort, to discipline, to listen.” We’ve discovered that our youthful energy can bring a tremendous amount of life to classical material.

When you first produced Much Ado, what were your expectations for the collective? Did you think it would keep growing into the entity that it has? How have you surprised yourselves with its development?

It’s safe to say that we had no expectations initially. The best part of Panoply has been discerning specifically what sort of theatre we’re interested in. Our mandate and vision evolves every day, which means we’re always challenging ourselves and each other. We’re more surprised, grateful and excited than we could have ever imagined!

I unfortunately didn’t get a chance to come up to Toronto to see Romeo and Juliet (in collaboration with Mixtape Projects, directed by Margot Greve), but that production had a stunning active aesthetic — how did members of your collective develop an interest in hyper-physical theatre? How has this interest developed over the course of your three productions?

In our final year at Ryerson we worked with the UK-based devised theatre company Frantic Assembly. It was then that Margot in particular took a special interest in physical theatre.

Our production of Macbeth was heavily physical too, as much of the rehearsal process was comprised of movement-based ensemble exercises. Margot developed a lot of the movement for Macbeth as well. While both productions were physical, the movement styles were entirely unique to each play. As a collective, it’s been important for us to devise movement collaboratively giving each production its own unique kinetic energy.

I also have to make note of the fact that this company has four Artistic Directors, all of whom are young women – which, of course, is wonderful. How has this fact informed the productions you choose and how they are produced? I understand Macbeth was gender-fluid?

Yes! Our collective is run by four women and is largely made up of women as well. We choose our productions with Project Proposals submitted by collective members looking to develop their visions into realized plays.

Gender is just as important a topic in our modern world as it is in many classical plays. Macbeth: More Than Man featured a female Macbeth, Lady Macbeth, Banquo and Malcolm. It was fascinating to examine this play (a play largely about being a man in a man’s world) through female relationships. What happens when a woman betrays her female best friend; is convinced to kill a man by her female spouse; and is then defeated by a man to be succeeded by a young woman? How are the themes the same? How do they get subverted when genders are swapped?

That said, as significant as it may be, we want to avoid capitalizing too much on gender. We believe it’s more important for the actor to focus on the relationships and actions of the character. The significance should be illuminated to the audience through the truth of the connection and their honest portrayal of the character.

How has it been for the bunch of you, as “emerging” artists (although I, in many ways, contest that label because I feel that it can infantilize instead of empower) to disassociate from the Ryerson School of Performance — now that you’re graduated — and emerge into the Toronto theatre community, going forth as professional artists?

It’s easy to feel underqualified and infantilized as a recent graduate. We’re taking the steps to build these qualifications for ourselves. As we define our mandate we become more assured; we develop our own artistic voice. We’re all about giving voices to young artists even if that means creating our own platforms to do so.

Where can anyone go — online or otherwise — to hear or learn more about Panoply and/or your upcoming productions?

We’ve just launched a new website and, with it, an announcement about our upcoming winter production of The Bacchae. You can learn more about us and our collective members at www.panoplycollective.com or through Instagram and Facebook.

Last question — what is for you all? Where do you see the collective headed? What projects are in your future and what can we expect from you moving forward?

Our next project is a feminist punk production of Euripides’ The Bacchae inspired by the Riot Grrrl movement.

As a company, our next step is to seek new collective members. We hope to host general auditions sometime in the next year! There’s a lot of competition out there— we want to challenge that by creating a compelling and collaborate cohort of young actors. 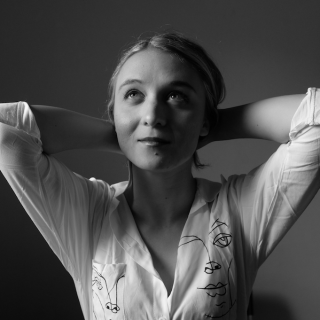 Camille Intson is an Esto-Canadian award-winning multidisciplinary artist, writer, scholar-in-training, and postgraduate student at the Royal Central School of Speech and Drama in London, England. She can be found everywhere on the internet at @camilleintson or at camilleintson.com.